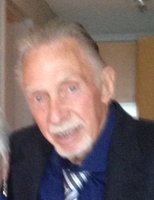 Retired Staff Sergeant of Renfrew Police Service It is with great sadness that we announce the peaceful passing of Maurice surrounded by his family at Renfrew Victoria Hospital on Tuesday February 4, 2020 at the age of 79. Loving husband of Ann Crozier for 58 years. Loving father of Angela (Sean McDade), Sheri Burrell (Brian Thoms). Maurice was the son of the late Roy and Lucy (Kluke) McQuade. Proud and cherished Papa of Jerilyn, Jesse, Taylor and Jayme. Dear brother of Kenneth (Sharon). Maurice will be fondly remembered by his many nieces and nephews and the Crozier family. Predeceased by his sisters Doreen Wood, Mary (Stuart) Ferguson and his brother Donald. Special thanks to all of the doctors, nurses and chemotherapy team who helped Maurice through the years. Visitation will be held at the Goulet Funeral Home,310 Argyle Street S, Renfrew on Thursday February 6th from 2-4, 7-9 pm. and on Friday after 9:00 am. A Mass of Christian Burial will be celebrated at St. Francis Xavier Church, Renfrew on Friday February 7th, 2020 at 10:30 am. Donations in memory of Maurice may be made to the Renfrew Victoria Hospital Oncology Unit or the Parkinson's Society. Online condolences/donations may be made at www.gouletfuneralhome.com