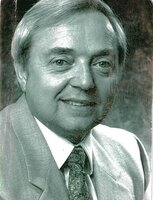 Ken passed away November 13th, 2022 in his 92nd year. Ken was born on October 21, 1931 to Marjorie (nee Brazeau) and George Lefebvre at Grace Hospital, Ottawa. Big brother to Roy. He attended St. George's parochial school. After graduation from Nepean high school, he was hired by the Federal Government for the summers, but chose to stay with the government for 35 years. He retired as chief purchasing agent for the Federal Reserve. He married Louise Pelletier, June 1957 and they lived on Leeming Drive for many years in Ottawa. Calabogie Hills was a favorite spot where they shared their cottage with family and friends for swimming, water-skiing and golf. Ken was president of the Norway Lake Association and to this day, the close family members have also built homes in the area. He enjoyed travel in the east and west. His beloved wife Lou passed away in 2003. In 2004 he met Nan Kennedy. They were classmates in elementary school and dated in college. They married in 2005, honeymooned in Italy and enjoyed cruising the world every year. They spent their winters in Florida and summers in the beautiful Calabogie area on the Madawaska River, gardening, golfing and sightseeing with family and friends. Ken enjoyed sharing stories of his wonderful life and was a talented craftsman. He took pride in his cousins, nephews and niece: Michael Lefebvre, Todd Lefebvre and Sandra Robert. "Papa Ken" to his grand nephews and nieces; Jacob, Benjamin, Owen, Colleen, Adam and Chelsea, Madison and Paige Robert. Lately he so enjoyed them as they began preparing for colleges and their careers. We thank Dr. Stephanie Langlois for her immeasurable help in guiding us through this difficult cancer disease and the Renfrew Hospice Staff for their deep care and compassion. You made this journey much more comfortable. A Memorial Mass will be celebrated at St. Francis Xavier Church, Renfrew on Friday November 18th, 2022 at 10:30 am. Interment Most Precious Blood Cemetery, Calabogie. In lieu of flowers, donations to Hospice Renfrew would be appreciated. Online condolences/donations may be made at www.gouletfuneralhome.com