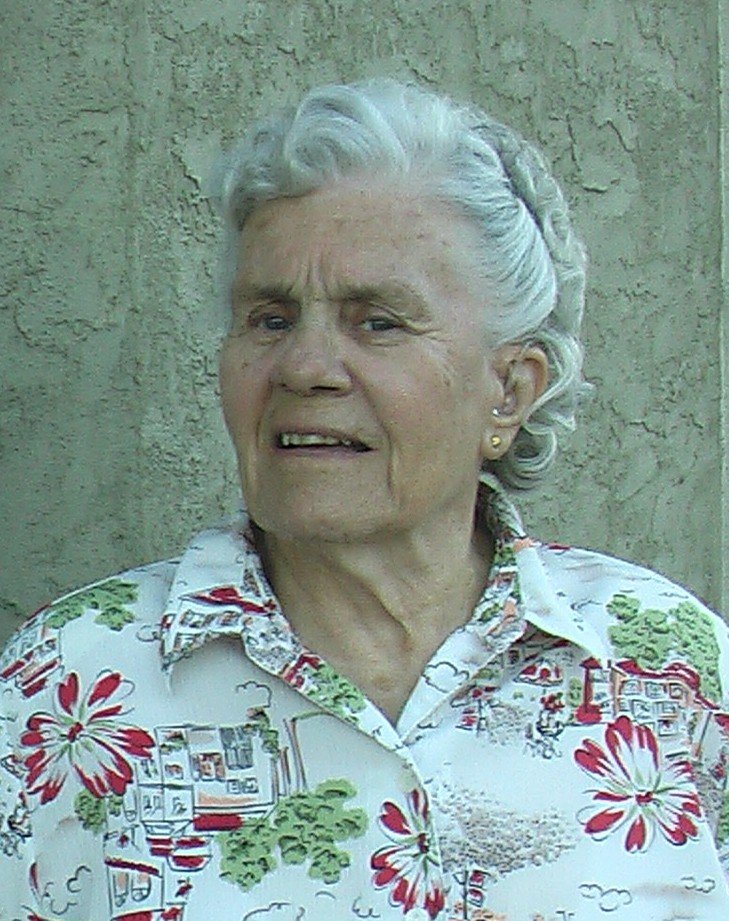 Peggy Summers passed away peacefully, at the age of nearly 92, in the early hours of 16 July 2019 at Groves Park Lodge Nursing Home, Renfrew, Ontario, in the company of her eldest daughter, Isabel McNab, and son-in-law Gordon McNab.

Peggy was cremated in Renfrew and the family will take her ashes to Calgary for burial with her beloved husband, David Summers.  A memorial service and interment will be held Tuesday 27th August, 2019 at 1:00 pm, at:

Peggy Mackay was born in Biggar, Saskatchewan on 27 July 1927 to Rae and Effie MacKay and was the third of 4 children: Ross, Marion (Marnie), Peggy and John.  Having moved to Saskatoon at the end of high school, she started a nursing training programme, but had to change her plans due to a hearing problem. She transferred to study business and qualified as a bookkeeper, a skill she used throughout her professional life.

During her college years, her younger brother John introduced her to David Summers, the love of her life, who became a United Church of Canada Minister. They married in June 1949 and were together for 62 years, having many adventures and travels and making a positive difference to many lives along the way.

Peggy supported David in his early Ministry in rural and small town parishes, but they then went with one small child to live as poor students in Edinburgh, Scotland, where David did his PhD, returning home with two children in tow.  They returned to Canada in 1953 to resume parish work and had two more children in Oshawa and then Carlton Place.

Both David and Peggy  had strong social consciences and in 1958 they moved to Toronto and worked together for the Religion Labour Council, supporting a social action agenda.  During this time, they provided a safe haven for quite a few troubled teenagers in their welcoming, if somewhat chaotic household.

So strong was their marriage that Peggy would have followed David to the ends of the earth and indeed came close to doing so.  In 1969 they went to work in Zambia for Mindolo Ecumenical Centre, then Ethiopia, New York and Washington for the African American Labour Centre.   While in the USA, Peggy returned to University and completed a Bachelors degree.  On return to Canada they resumed parish work, first in Edmonton and then Wainwright, and enjoyed being closer to some of their children.

In 1985 David took up a post with Canadian Save the Children Fund and the adventurous couple, with Peggy’s mother in tow,  spent 3 years in Kenya , before retiring to Fort Saskatchewan.    When David came out of retirement again, to take up the call to run the programme in Jamaica for a year for SCF, Peggy stayed in Canada to look after her mother whose health was declining. Their final move together was to Calgary, to be closer to the two of their two children who were living in Canada at the time.

Peggy’s life changed dramatically after a serious car accident left David with a brain injury, necessitating 24 hour care.  She pragmatically rented a seniors residence apartment adjacent to David’s care facility in Calgary and stayed there after he died in 2011 until she needed more care herself.  In 2017 she moved with Isabel and Gordon when they relocated to Ontario.

Peggy was a person with a very strong commitment to her family and social justice and had personal friendships with people from all walks of life. She was the heart of the Summers  family’s warmth and inclusiveness.  She was always ready to set another place at the table or supply a bed – giving her own children many informally adopted brothers and sisters at home in Canada and around the world.

Peggy was a rock in a crisis, finding practical solutions to almost any problem, but once the crisis was over she would lose all composure. She was fundamentally a generous individual, always ready to offer a helping hand and assistance including money to anyone in need, but she would always have a clear record as to where every penny went.  She would add to her loan tally for her childrens’ $.25 cent cost of chocolate bars, ensuring fairness to all!

Peggy was a life-long member of the Eastern Star and was dedicated to their mutual support and fellowship as well as their charitable activities.  She was also an early feminist, although it is unlikely that she would have claimed this title.  She played a strong role in supporting Women Trade Unionists, organising Union activities, supporting the development of CUPE and marching in numerous Labour Day Parades.  She was a role model for many younger women. She always stood up for what she believed to be just and fair, even when it challenged convention.  When preparing to go to Africa with David in 1969, she was told that, as the wife, she had to sign a commitment not to work, while she was in Africa.  She refused, saying “You are not employing me, you are employing my husband! “ As ever, sticking to her principles of what she believed to be right!

Share Your Memory of
Margaret (Peggy)
Upload Your Memory View All Memories
Be the first to upload a memory!
Share A Memory
Plant a Tree