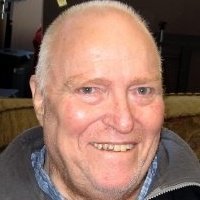 Joseph Edward ( Eddie) Lee Past Grand Knight, Renfrew Council 1916 Knights of Columbus Nov 14th 1942 -December 10th 2020 It is with great sadness that we announce the passing of Ed. Predeceased by his parents Joseph E. Lee and Mary Alice Lee ( Blacquiere). Father of Brenda (Christopher Heilmann), Ottawa, John (Cherie), Renfrew and Janice (Eldon Behm), Renfrew. Grandfather to Andy, Jack and Daisy. Predeceased by his former wife Linda Lee (Laderoute 2017)). Brother to Carol , Diane and Trish. Brother in law to Joan Hebert (Larry predeceased 2018). Born in Prince Edward Island and raised in Renfrew, Ed loved being a part of the Renfrew community. He worked as a postal clerk at Renfrew Canada Post from 1964 to 2002. He was a Grand Knight of the Knights of Columbus, a part of the Renfrew Little Theatre, the Lumber Baron Festival, CKOB, Renfrew Cable Television, an active member of both Our Lady of Fatima and St. Francis Xavier parishes and much more. Ed passed away quickly and fittingly (as a social media and tech lover) with his computer mouse still clasped in his hand. He was a complex man, who had a winning smile, an infectious laugh and a big heart. He will be greatly missed. Due to Covid 19 restrictions, celebrations will be postponed. A celebration of life will be held in the spring/summer. Details to be released at a later date. Donations to the Bonnechere Manor (whose staff so lovingly took care of Ed for over ten years) are appreciated. Arrangements entrusted to the care of the Goulet Funeral Home

Share Your Memory of
Joseph
Upload Your Memory View All Memories
Be the first to upload a memory!
Share A Memory