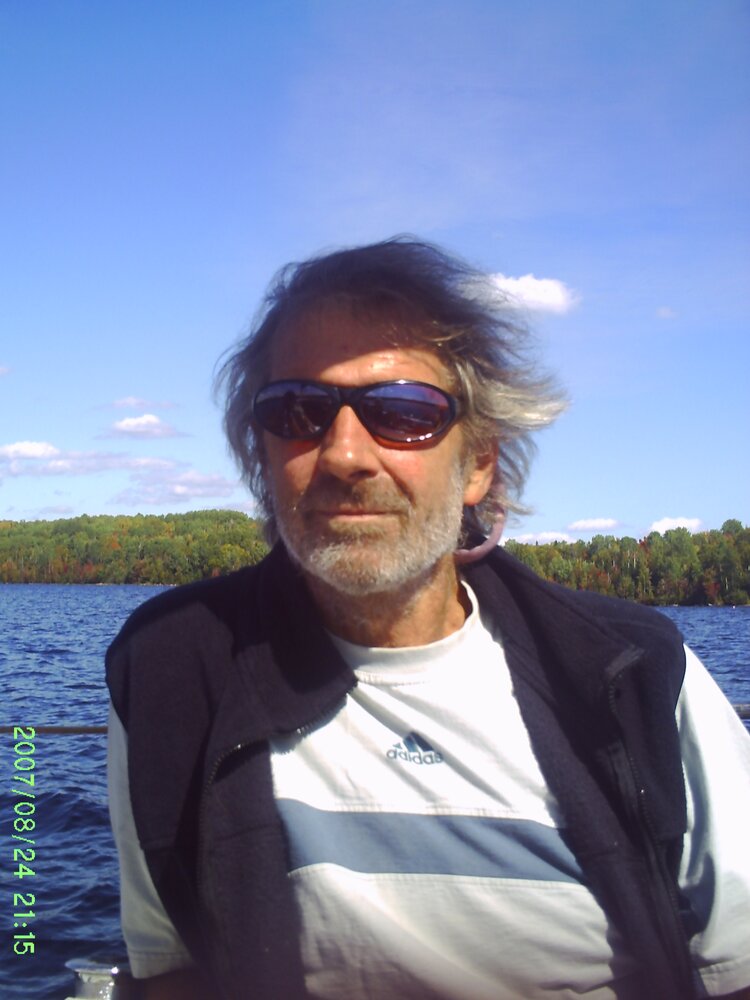 In loving memory of David Edward (Ted) Gretzky, we are saddened to announce his passing on December 26th, 2021, after a brief illness. Ted was a kind, gentle, compassionate man whose thirst for knowledge and adventure encompassed all facets of his life. As a young man he embraced his independence and spent several years travelling, exploring and working his way through Australia, Bali, Indonesia and India. Upon arriving home, after a period of transition, Ted established a construction business, which evolved into a successful venture under his direction. His humble essence, love for nature, birding, whitewater canoeing and the call of wide open spaces saw him leave both the business and the city behind and Quadeville, Ontario became his life. Ted and partner, Karen Grasley (deceased 2009) immersed themselves in their new home, opening Gretzky’s Restaurant which quickly became a hub of the community. Ted’s skills as a whitewater guide led him to his role as Safety Coordinator for the fledgling Boundless Adventures where he eventually became the Risk Manager. There he oversaw an ambitious and sprawling outdoor adventure program and trained generations of staff (who under Ted’s tutelage would go on to become some of the best paddlers and outdoor professionals in the country). He was adored and admired for his steady and subtle leadership, and his always calming command during all manner of emergencies both large and small. These same traits led Ted to one of proudest accomplishments – he was the Fire Chief of Brudenell Lyndoch and Bruceton from its inception, plus Raglan and Hardwood Lake after amalgamation. Seeing a need in his community, Ted rallied support, and approaching council, requested 3 sheds throughout the township filling them with basic fire fighting equipment. From this humble beginning Ted created the amalgamated volunteer fire department of Brudenell, Lyndoch and Raglan Township and saw it grow from the 3 equipment sheds to 4 fire halls with pumpers, tanks, extrication equipment, water and ice rescue and First Responder training. In his 25 years as Fire Chief, Ted coordinated, trained, equipped, and created policies for 4 Fire Stations and hundreds of Volunteer Fire Fighters. Ted and his fellow volunteers built a fire department they were proud of and his expertise at navigating internal Fire Hall politics, local council politics, and the technicalities of all aspects of fire service ensured the best level of service possible to the residents of BLR for those 25 years. Scattered throughout his life, among all of his adventures, Ted sailed boats in the Caribbean Sea, the Great Lakes, and Hudson’s Bay. He also completed over 160 sky dives. Not yet ready for retirement after Boundless and the Fire Department, Ted returned for a time to the bush, where he was known as one of the most skilled and savvy Fellers in the Madawaska Valley. He will be sadly missed by his partner, Lorna Sullivan, and her children Ali and Brennan. Ted will always remain dear to the hearts of his mother Eleanor Gretzky, his sisters Nancy Jane (John Pus), Cathy (Reg Riopelle), Mary Lynn (Barry Zwueste), his nephews and nieces and their families. Predeceased by his father Edmond Gretzky (March, 2021) The love and support so freely given by his family and dear friends Donna, James, Jacob, Tara, Diana, Radni and Gina, with the help of Terry, Jack and Doug, allowed Ted to remain in his home, which he so dearly loved, until it was no longer possible. Special thank you to the staff of Bayshore Home Care, Simone Howard of Palliative Sedation Therapy and the professional and compassionate care of Barry’s Bay Hospice – you were all angels. Cremation has taken place and, as per Ted’s wishes, his ashes will be blended with the Madawaska River in the Spring. For those wishing to make memorial donations the family would like to suggest Madawaska Valley Hospice, 7 St. Francis Memorial Drive, Barry’s Bay, ON K0J 1B0 May you have found the answers you sought my brother - S

Share Your Memory of
David Edward (Ted)
Upload Your Memory View All Memories
Be the first to upload a memory!
Share A Memory