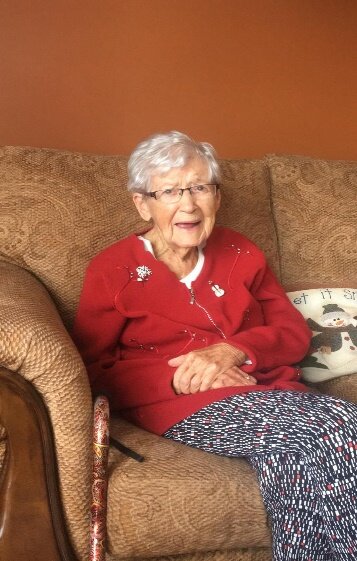 Mothers hold their children’s hands for a while but their hearts forever. It is with tremendous sadness that the family of Mildred “Millie” Leadbeater announce her passing which occurred peacefully on 18 May 2022 in the loving arms of her youngest daughter. Upon her birth in 1920, Millie was predicted only to live three weeks as both her mother and twin sister died at her birth. Offered up to adoption to a neighbor for the small sum of $1.00 due to her fragile state, Mom went on to outlive that prediction by quite a few extra weeks (one month shy of her 102nd birthday) and what a life she lived. Millie was an accomplished pianist. She was given her first piano by her adoptive parents at a young age. She began taking lessons from the religious Sister’s although they insisted, she play classical, Mom was keen to learn Scottish music. Her mother intervened and Millie began playing her love of Scottish music. Mom played countless events throughout her life and was a sought-after accompanist. Millie was a WWII veteran. She enrolled as a Teletype Operator and completed training in Rockcliffe, ON followed by a period of service in Toronto. Due to an existing health issue her military time was cut short and she returned home to NS. Upon returning from her military service, she decided to change her career focus to becoming a nurse. While walking down Main Street in Antigonish she happened to see a handsome barber in a window cutting hair. She told her friend I’m going to marry that man. Later while doing training at St Martha’s hospital, she came upon the handsome barber cutting a patient’s hair. He soon took notice of her and invited her to his home to play with his musical family. After a brief engagement period they were married, and she became Mrs. Len Leadbeater. During her time in Antigonish she hosted a Scottish radio session with live musicians in the studio. She loved to tell the story of her friend Johnny Wilmot who lived in North Sydney. One Sunday afternoon Johnny suddenly appeared at the show, his wife later said she was astounded to turn on the show while ironing and heard her husband playing live, thinking he was out in the yard. During this time in Antigonish she coached the late Buddy McMaster how to read music and her beloved lifetime friend Lloyd MacDonald, who was a regular on the show. After moving to Sydney, NS with two children she continued to host numerous musicians, she went on to have five more children and began working as a medical receptionist once her youngest child started school. The house on Welton St was always full of music and parties. When a knock was heard at the door regardless of hour it most likely would be a musician looking to play a few tunes with her. No fiddler would ever be turned away. After her husband’s death, the house was sold, and she moved into a Seniors apartment. She had her keyboard and still played on but with fewer musicians due to the proximity of apartments. After suffering health setbacks at the age of 80 she left Sydney to live with her youngest daughter and followed her military postings. She developed great friendships where-ever she lived. She was always delighted when musicians from Cape Breton travelling through would stop to play tunes. A strong lover of Scotch, she truly believed that it kept arthritis at bay. Single malt, no ice and “for god’s sake don’t water it down”. Mom was always cheerful and easy going throughout her life unless she was talking about that “little pipsqueak Tom Cruise portraying Jack Reacher”. She loved her family dearly although not able to see them as often as she would like. She was lovingly cared for the last 22 years of her life by her youngest daughter Mary. Millie was predeceased by her beloved husband Len (1992) and is the last surviving member of her biological and adopted family. She will always be in the hearts of her son Len (Judy Duffy), Jim (Donna McRury), Theresa (Bruce Edwards) and Mary (Dave Parker). We loved her dearly and were loved dearly in return. She will also be missed by countless grandchildren, step-grandchildren, and great-grandchildren and many loving friends. Waiting at heaven’s gate will be her well-loved companion Bogey. Millie’s fingers will no longer play the tunes but as all music lovers know, silence is part of the music. In Millie’s memory, please raise a glass of scotch (single malt, no ice and don’t water it down) to toast a life well lived. If you wish to donate in her memory, please do so to your local SPCA. The Ontario SPCA-Renfrew County Animal Centre. 115 Woodcrest Dr., Pembroke, ON K8A 6W4

Share Your Memory of
Mary
Upload Your Memory View All Memories
Be the first to upload a memory!
Share A Memory