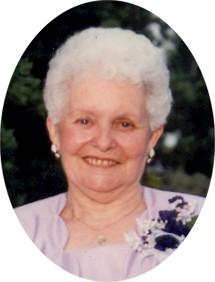 Friends of the Disabled/Sunshine Coach Renfrew

Please share a memory of Mary to include in a keepsake book for family and friends.
View Tribute Book
It is with great sadness that we announce the death of our mother, Mary. Wife of the late George N. Russell (Jan. 3, 1976). After arriving in Canada from London, England (May 1, 1946) she along with George raised seven children. Loving mother of Pat (Eoin) Sellar, Hamilton, Marion Gale, Florida, Linda (Ernest) Cartier, Renfrew, Connie (Terry) Dick, Haley Station, Rosemary (David) Brydges, Renfrew, Richard (Cindy) Russell, Renfrew, Shelley (David) Anderson, Haley Station, and grandson Jason Russell, New Lowell, Ontario. Greatly missed by her grandchildren and great-grandchildren. In lieu of flowers, donations in Mary's name to the Sunshine Coach would be appreciated. Memorial DVD can be viewed at www.diottevideodesign.com

Share Your Memory of
Mary
Upload Your Memory View All Memories
Be the first to upload a memory!
Share A Memory