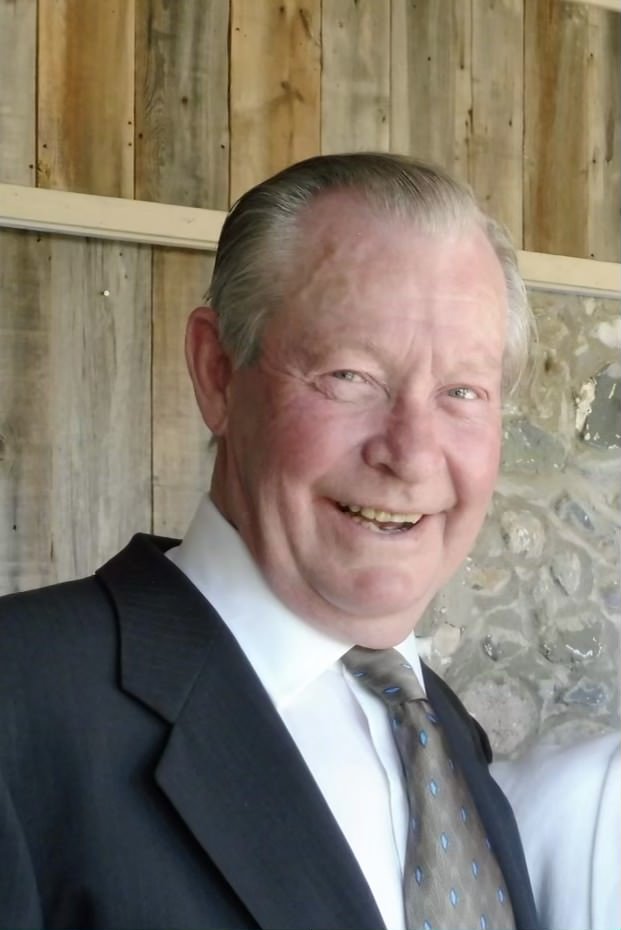 After a wonderful life, Earl Robert Pearce, 80 , passed away peacefully at the Ottawa General Hospital. Left to share his stories are his beloved wife Kathy (Nicholson) his daughter Karen (Jeff) Wright, and son Kevin (Kristin) Pearce along with his dearly loved grandchildren, Stephen and Lily Wright. The family is grateful for the compassionate care they received from the staff at 5th floor East and also the Hematology Clinic at the Ottawa General Hospital. The family sends a very special thank you to Dr. Kilabuk and team from Medicine, as well as the Palliative Care team at the General. There will be no visitation or service as per Earl’s request. Online condolences and donations to your choice of charity can be made at www.gouletfuneralhome.com Earl was born to humble beginnings in Yorkton Saskatchewan, to Edwin and Dolena Pearce. In 1941 the family moved to Hamilton Ontario which remained his hometown throughout his life. He was an avid…very avid Tiger Cat fan throughout his whole life, raising his family on the “Oskee Wee Wee” cry and the Black and Gold Ticat colours, even going so far as to paint his boat those same colours one year. He graduated from Delta High school in Hamilton and went on to successfully complete his C.A. During his studies he met his future wife Katherine Nicholson who was completing her R.N. They were married in 1967 with their daughter, Karen, following in 1968. His career quickly flourished, the family moved to Espanola and then on to Ottawa while Earl worked for E.B. Eddy. Their son Kevin arrived and the family unit was complete. His love for his family and the outdoors was always evident. He was an avid hunter and fisherman raising his kids on his passions. In 1975 the family found their gem, a cottage in Calabogie. Weekends, vacations, Christmas, Easters every minute of free time was spent there. It was a place like no other. Earl did all things and enjoyed labouring on the cottage. Many projects were completed with the help of good friends and family. Always good natured and with a great sense of humour, Earl made those around him feel comfortable and appreciated and had a genuine enjoyment in all things he did. Earl was an astute businessman, with the ability to always see the bigger picture. After 15 years at E.B.Eddy and finishing as Senior V.P. Finance at E.B. Eddy, in 1983, he was moved to George Weston Ltd in Toronto . His career was busy, moving from President of the Westons Resource group (Fisheries and Pulp and Paper) to being appointed, Senior VP and CFO of George Weston Ltd. He was a Weston Board Member, Chairman for Diversified Research Laboratories Ltd and British Columbia Packers Ltd, Member of the Advisory Board for Allendale Mutual Insurance Canadian Operations, to name just a few. He managed to do it all with ease. He and his wife Kathy were fortunate to travel the world as he did his work, seeing many countries and making many new friends. At the age of 56 he happily retired. The family cottage in Calabogie was torn down and he became the general contractor, building their dream retirement home. His other passions and talents were now put into place as he built Kathy’s dream kitchen, all woodworking and carpentry was done by him with love and care. The kitchen remains the same to this day, full of good times and love. His wood working continued through out his life, even building a cradle for the birth of his granddaughter Lily. His real calling came in 2004, when he purchase his Woodlot a.k.a “The Huntcamp”. This was his greatest pleasure and pride and that he was able to share his love of it with his grandchildren as they grew up, made it even more special. His love and appreciation of nature were now being passed down to his grandkids. He loved the forest, he had an understanding of forest management from his career and a thirst for more knowledge of woodlots. His happiest times were spent on his tractor working his Woodlot and getting updates from his grandson Stephen in the Yukon and his granddaughter Lily in Halifax. His kids, Karen and Kevin were a close second. Earl survived two bouts of bladder cancer, losing a kidney in the last battle in 2018. In 2018 Earl was also diagnosed with Myloprolific disease, a blood cancer that changed to Mylofibrosis. He met it all head on with determination and didn’t let it stop him enjoying life and the presence of those around him. Even during his last weeks in hospital he was always the optimist and never complained, asked how he was he would say “Perfect” or things were “Marvelous” He passed away surrounded by love, with Kathy, Karen and Kevin by his bedside. He is so greatly missed.

Share Your Memory of
Earl
Upload Your Memory View All Memories
Be the first to upload a memory!
Share A Memory